The current architecture for computers is obsolete. Essentially unchanged since 1945, it was originally designed for a stand-alone computer. With the Internet providing connection to a billion other computers, it is inherently defective.

The modern computer’s basic architectural defect has been overlooked in today’s golden age of specialists because of its sheer generality and utter simplicity. The big problem is that existing computers have only a single, unitary hardware structure. Consequently, computers have no effective internal hardware defense to prevent even a single virus or any other software malware from going absolutely anywhere inside the computer or doing anything, however destructive, without any fixed limit.

By its very hardware structure, then, existing computers are innately vulnerable to Internet attack by software malware and cannot be successfully defended internally by software alone. All that is required for successful attack is entry into the computer, which Internet connection to millions of malware sources now virtually ensures. Some malware inevitably gain entry and just one can be fatal.

Consequently, however high tech they may be otherwise, existing Internet computers simply cannot be made reliably safe. In terms of basic structural architecture, they are only as high tech as the Titanic, with essentially the same basic structural defect.

The solution is a simple new computer architecture to solve the overwhelmingly complicated problem of Internet security. A new, inner Private Unit is created by using an uncomplicated inner hardware firewall to protect the computer’s Central Controller (together with microprocessor and memory), making them inaccessible from the rest of the computer and thereby also inaccessible from the internet.

The remaining Public Unit includes one or more additional microprocessors (or cores) and memory, and is connected to the Internet.

The computer’s Internet-disconnected Private Unit controls the Internet-connectedPublic Unit. Communication between Units is generally one way only, outbound fromPrivate Unit to Public Unit, so the Central Controller functions generally like a TV remote controller (signals out only). 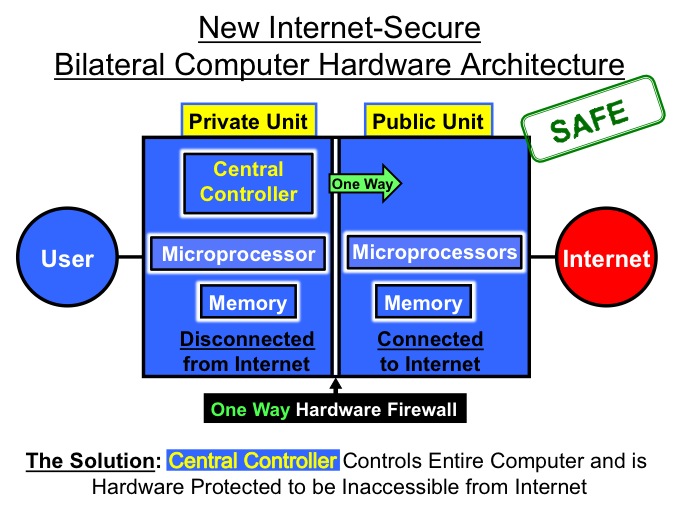